We have very few photos round the Spirit Store of past gigs or artists who have performed on our small stage. I guess we are always looking forward and are happy enough to know that people remember the really magical nights anyway. But there is one photo above the bar:

It's of Josh Ritter, Glen Hansard and myself outside the Spirit Store on a Spring evening over thirteen years ago. We had just been across the road to visit my then-girlfriend at her family’s home and sing her Happy Birthday. I was so chuffed that I could do that for her as she was a massive Frames fan at the time. So was half of Dundalk, as the band had played a number of legendary gigs in a venue up town called Rock the Planet in the late 90s.

We look happy and relaxed in the photo, like a band almost. I was loving running the venue and keeping company with a generation of musicians who went on to completely outgrow our place, but who still came back when they could.

I look at the photo now when customers ask about it. What I think about is Glen and Josh singing Happy Birthday to Laura. And what the customer thinks is, “Those fellas have sold millions of albums, won Oscars and generally bestrode the earth like musical behemoths, and the guy in the middle, me, is still pulling pints.” Still, I got to marry Laura two years later and we have four amazing children.

And although the Spirit Store has changed and grown and is much less chaotic there are still many magical musical moments. We have built a new venue upstairs that will carry us through the next ten years of performance, film, drama and maybe even a summer school sometime. We are adapting the business to changing demands all the time.

Back then the summer festival scene was a day out in Slane and the beer was mainly what was brewed in the two Dundalk breweries before both sadly closed in more recent times. Now we have to survive a massive summer festival schedule of global acts and all that Dublin has to offer for the rest of the year. So we schedule as diverse a range of music as we can and pull in and still aim to surprise and delight punters who come across our threshold.

Now too, our beer comes from lots of small breweries, 8 degrees, Brewdog and Cumberland Brewery in Newry where we get our cask ales from. We have the only cask pump in the county in fact. We are happy that our Guinness is in good order and are very pleased to be able to work closely with The Gleeson Group in selling their fine range of beers up in the venue - which The Gleeson Group supported very generously during its redevelopment. We have learned a bìt about wine and a bit more about whiskey. We have just started doing cheeseboards and cured meats in cooperation with our friends at Sheridan Cheesemongers and just got accreditation from Failte Ireland as a quality bar, which is something to be happy about.

I had my brother home from Hull recently and we went for a drink to the Spirit Store, like ordinary punters. He played chess with a Polish guy, we listened to live music, drank Knockmeeldown Stout and talked about our children. 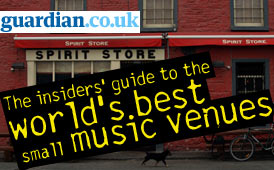